So here it is, the Tesla Model 3

Posted on April 1, 2016 by justdrivethere

Why would 300 people wait in line for a store opening? A new iphone? The PS4.5? Nope, it’s for a car! Just like we had in the 1960s for the first Mustang, history is repeating itself, this time for an electric car, the Tesla Model 3. Shocking non?

First of all, here it is (I’ll update with better pictures when I get them):

Oh and check out the touch-screen: 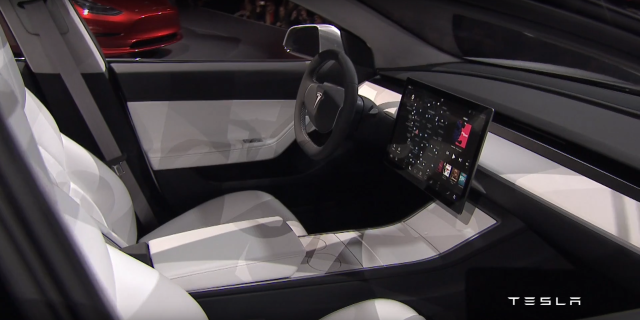 So why the buzz? After all, a Jaguar XE is also pretty, but no one lined up for that.

Easy, it’s the first mass-market electric car that you actually want to earn. Seriously, it looks good, has great performance, is practical and relatively cheap. Moreover (and the main reason why people line up for the car), the EV rebates will not last forever, and since the car will be in production in late 2017, people want to make the most of it before those rebates disappear. Not to mention, the refundable deposit is only 1,000$, which is enough to make people think they can attain their dream of owning a Tesla (I’ll admit it, even I considered putting a deposit). These things are selling like hot cakes, and from the looks of it, even if you go and put your deposit now, chances are you won’t see your car until 2019…

Otherwise, what else did we learn?

All Model 3’s will include Autopilot, which is very good! The slowest version will do 0-60mph in six seconds, It will comfortably fit 5 people, 215 miles of range minimum, and in 24 hours, 115,000 people ordered one! On the logistics side of things, the Gigafactory, which will basically double the world’s production of lithium-ion batteries is operational, and by next year the worldwide supercharger network will reach 7,200 stations. But wait, there’s more! Which will be unveiled later in the year…..