The Car Crash – it sucks, but it happens

Posted on February 19, 2020 by justdrivethere 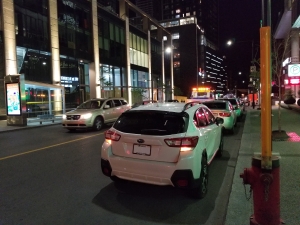 The first time you crash is an unfortunate and unforgettable experience. We all think it would not happen to us, that we are good drivers, but sometimes, you just can’t avoid it.

It happened to me a couple of years ago, and the worst part was, that it was in my brand new car!
I was driving back home from work, in downtown Montreal. As I was driving on the main road, I started approaching an intersection ready to turn left. The light was flashing green, a sign in Montreal that the opposite direction has a red light and you are clear to make the left turn. Out of the corner of my eye, I saw a blue pickup truck that was going pretty fast, but I did not think much about. I assumed the driver was going to stop.
As I made the turn, to my horror, I realised he was not stopping, and in a flash I felt the impact on the rear right side of my car. It was so violent my car rotated 90 degrees.
I was in shock, but my first reflex was to drive my car off the intersection. My car was still driveable so I pulled over to the side of the road.

This can’t be good I thought. I got out and walked around. For a while my world stopped as I saw the damage. It did not look good, and my rear wheel was flat. As I was checking things out, I was approached by a few people to see if I was okay, including a bus driver who said he had seen everything and the other driver had run a red light. He gave me his phone number and said he was ready to testify. Maybe there are still good people in this world.

Looks bad on the surface

I went around to see the other driver who was pissed off as well. His truck did not look in good shape either. There we were, both in a crash and not sure what to do. We decided to exchange information (license and insurance numbers), and took a few pictures of the crash. As I was not sure how this worked, I took pictures of everything, in detail.
We decided to return to our cars and call our respective insurances. My insurance was helpful and took me step by step on what to do. They needed a lot of information, but told me things were going to be okay. The other driver had run the red light. As I had a witness to validate my side of the story, things were looking good.

So many people, yet so lonely

Well, looking good for the next few days maybe, but for now I was still gutted. My car was not driveable and it was now close to 9pm. As I had a special insurance with Subaru, I called for a tow to the nearest garage. A tow-truck was sent, but they needed a police report in order to remove the vehicle. So what did I do? I called 911, who promptly sent me to the non-emergency number and said a team would be on their way soon. After 30 mins they showed up, and after exchanging with the towing company, my car was removed. Can you imagine, being in your first crash, and then talking to the police, trying to convince them they need to validate I was in a crash just so that my car can be towed to the garage. It’s a lot to work with.

All in all, it took 3 hours between the crash and my heading home. Thankfully I was downtown, so I just took a metro home, gathered my senses and drank a large scotch.
The next few days went by quickly. My insurance company arranged a replacement car (Chrysler 200….) the very next day, and took care of all the repairs.

up, I was releaved to see that the damage was only cosmetic. The bent wheel was actually just a deflated tyre, and the bodywork had taken all the damage.
After three weeks and 9,000$ worth of repairs, my car was good as new.
I have to say, given the crash, I would have never imagined my car would have been repaired the way it was. Turns out, Subarus are really built like tanks! Now I love them even more!

And yeah, crashing sucks. But try and keep calm, don’t give in to emotions, try to be rational, and you will just make it out okay. At the end of the day, if the damage is only material, you are still the lucky one.

2 Responses to The Car Crash – it sucks, but it happens