It was in 2015 that the “fracas” happened. Jeremy Clarkson, the most famous automotive journalist in the world and star of the BBC’s Top Gear, got angry at some food and punched one of the show’s producers. This tends to happen often in TV, I believe, however, ever since Top Gear kept getting in and out of hot water, the BBC decided it was enough and let go Jeremy Clarkson. His co-hosts Richard Hammond and James May then promptly left the show as well, and all three joined Amazon. This was perfect timing for Amazon, who was pushing for the creation of more original content, and needed big stars to animate its shows, to reach a world-wide audience. The rumours went wild for more than a year, but finally, in November last year, the first season of The Grand Tour aired. You know what? It was not that good.

Don’t get me wrong, the car videos were great. That opening sequence was superb, and I did rewatch it multiple times. But overall, the show felt like there was no purpose. It clearly was not about cars, since there was not even one car review per episode. Clearly, that opening sequence with all the car enthusiasts in the desert was just a lie. It felt like Top Gear, albeit the later series Top Gear. The episodes you watched and forgot. Clearly, all this was a way for Clarkson, Hammond and May to spend a lot of money. Story? Not much. They just drove expensive press cars, or badly-made-for-comedy vehicles (made by a specialized company, not themselves, let’s not kid ourselves) wherever they wanted. Just like before, everything was scripted, only more so. Even the live-audience segments were bad, way over the top.

The reason old Top Gear was good, was because it was a car-show, done in a comedic way. Here, they tried to make a comedy-show, in a car-related way. As funny as Clarkson Hammond and May are, acting is not their strong suit, and it showed. Just look up that Edge of Tomorrow bit with the military. It was just embarrassing. Maybe they’ll correct all this for next season, but based on historical evidence, I have my doubts. I honestly think that the Celebrity Brain Crash was done because they liked the idea of it, even though it was absolutely useless and not funny. We have to face the facts, Clarkson, Hammond and May are simply yesterday’s news. Just like Eiffel 65, they had one hit, and their time is now over.

Which leads me on to actual Top Gear. The BBC, ever the smart people, decided to cast Chris Evans as the star of the new show. The man who paints all his Ferraris white, and never drives them, so they do not lose their value. Also he’s a morning-radio show host, part of the most hated people in the history of humanity. As expected, he crashed and burned. The reboot series was passable at best. It tried too hard to be and not be old Top Gear at the same time. It could have been halfway decent without Chris Evans.
Thankfully he resigned, so the show could focus on the actual talent. And that talent was actually good! 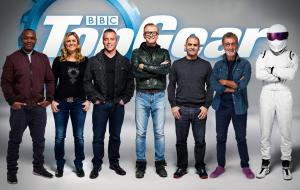 The co-host, now turned host, was Matt LeBlanc. Yes, Joey. It may sound weird to cast a 90s American sitcom star in a British motoring show, but Matt is what Chris Evans is not: a real car enthusiast. He actually drives his cars and knows how to appreciate the philosophy of the automobile. Chris Harris, the now co-host is a god among youtube car enthusiasts. His specialty? Driving fast, drifting and being entertaining. The man got to drift an F40 and F50 back to back, so he was always going to be a great addition. The last co-host was Rory Reid. Unknown to me, and most of the audience, he is a valuable addition to the group, bringing a more novice point of view to the cast (a bit like Richard Hammond back in the day). Watch him, and you can just feel his enthusiasm for the job, and it just works. For fun, here is a video of Chris Harris doing what he does best: Drifting expensive cars.

In order to not have the same people all the time, the BBC chose to add “contributors” to the cast, in the form of Sabine Schmitz (the Queen of the Nürburgring) and Eddie Jordan (he of F1 fame). Contributors are not new, the initial series of Top Gear (pre-2002) regularly had them. Last series they were good, and this series we have yet to see what they do.
The Top Gear reboot with Chris Evans was passable for many reasons. The main reason it was not actually good was that they constantly tried to copy the old format, to no avail. Top Gear worked because of the relationship between Clarkson, Hammond and May. Chris Evans does not have any relationship with anyone, therefore it all felt awkward. 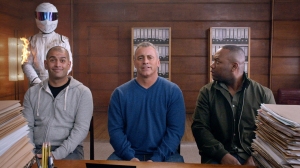 With the reboot of the reboot (sans Evans), also known as Series 24, you can feel the relationship between Matt LeBlanc, Chris Harris and Rory Reid develop. They work together and have genuine fun. In just two episodes there have already been numerous occasions where clearly things went off-script, and the show is better off as a result. The flow between the cast seems more natural, making it more watchable. But this time, the BBC were smart and did not put the emphasis on the hosts. The emphasis now, is the cars, and that is what Top Gear should be about. This time you actually get car reviews, you actually learn stuff on the cars, and the challenge parts feel genuine. Just watch that first episode review of the Ferrari Fxx K. Is it about Harris? No, it’s about the car! They are not trying to be like old Top Gear, they are just being Top Gear.

After two episodes, I really like the show. I plan to rewatch the episodes, which I cannot say of the Grand Tour. The cast has chemistry, the challenges have a point, and the humour does not feel forced. It’s all about having fun. It reminds me a bit of the later Top Gear USA episodes, when they left the UK carbon copy format and did their own thing. And it just worked. Sure, Top Gear will no longer appeal to 12 year olds and middle-aged women, but the core fans, those who felt left out by The Grand Tour, will be happy. After all, Top Gear was always about CARS, first and foremost.

Do you have old Top Gear withdrawal symptoms? You know where to go: Top Gear 10