Posted on September 29, 2012 by justdrivethere 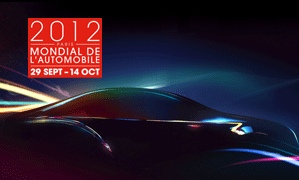 Once again, the most famous car show in the world opens up with high anticipation, and once again, petrolheads around the world feel slightly disappointed.

It’s not as if there were no interesting cars on show. McLaren showed what their future F1, the P1 will look like, Renault unveiled their new Clio RS, Lexus showed off a rather cool concept, supposed to show what the future IS will look like, and VW unveiled the new Mk7 Golf GTI.
The usual suspects did what they did best, Peugeot once again showed the world they can make a supercar, but failing when they put a diesel engine in it, Toyota continued with their green weight-saving tech with the FT-Bh, Ferrari unveiled what the future Enzo chassis will look like, BMW continued their expansion on the wrong side, with a rival to the Mercedes B-class, and finally, Venturi took a step deeper in digging their own grave.

It’s all the same, and for a show that brings in so much media attention, I can’t help but feeling indifferent.

Don’t get me wrong, I love the Paris Motor show. I used to go there each time from 1998 to 2006. After 2006, I sort of gave up. Not because of the crowds and expensive tickets, but more because it did not make me feel excited anymore.

The last show I went to, in 2006, was all about hybrids and green tech. Guess what, as much as I love hydrogen technology, it certainly does not excite me the way a Lamborghini Murcielago does (or even the wacky Renault concepts of the past). It’s not because there are less cars coming out – if anything there are now much more per year-, it is mostly due to the fact that there are no more ground-brakingly exciting cars anymore. It’s all evolutions of existing cars, or new niches that are being explored. And when something new does come around, it tends to simply be a new exterior, with a slightly more fuel-efficient engine. I mean look at the Peugeot Onyx for example. The exterior is all new and frankly looks pretty good, but underneath? Well, it’s just a retired Peugeot 908 Le Mans car (no, it’s not cool. It would be cool if they produced it. Better yet, they should make the Citroen GT!).

Another reason why the Paris Motor show is less exciting? Simple, technology.
No, I do not mean green technology or even car technology, but Information Tech. Why? Well put it this way, back in 1998, the internet was still something new for the everyday household. I could not really go online to see pictures of the latest Bentley, as looking up the pictures and printing them would cost my parents valuable 56K internet time. So the average car enthusiast looked at car magazines when they came out, and car manufacturers had an easier time keeping their latest concept under wraps.
Today, however, everyone has at least 2 computers and endless access to online resources. Someone who knows someone may have a picture of the latest concept and might Tweet it or post it on their blog. As a result, Car manufacturers don’t even bother keeping their latest concept under wraps, and just show it off as soon as it is ready. The Paris Motor show is often where a new car makes its first public appearance, not the first time it is revealed; the internet is there for that. Look at the Mk7 Golf, it was revealed a week before Paris, so once it was at the show, it was old news, nothing exciting.
Or take the Jaguar F-type for example. Supposedly unveiled at Paris, but because of all the spyshots, we all knew what it was going to look like. The only surprise we get is the confirmation of what we all already knew. The reason the magic of the show is gone, is because the element of surprise is gone.
Sure, I can regain that element by living under the sand for
the next two years, but then, I won’t know what colour the Porsche 918 will be available in when it comes out. That is the problem with technology, we have access to everything, so we are surprised by nothing.

That said, if I had the chance, I think I would go to the Paris Motor Show this year, as two of the most exciting cars I desperately want right now are there: The Toyota GT86 and the Mk7 Golf GTI. Oh how I dread the day I have to choose between the two!

See some superb pictures of the show through my friend Deprem

Automotive enthusiast, Travel seeker, Whisky aficionado
View all posts by justdrivethere →
This entry was posted in News. Bookmark the permalink.