If you could have only one….

Posted on September 4, 2012 by justdrivethere

It’s a question often feared by motoring enthusiasts. What it basically means is taking every single car you love, and choose only one. Usually, the first choice is the craziest vehicle you can think of, like a Pagani or Koenigsegg
But that would be too simple. When I think of this question, I like to think of it this way: “If you could only have one car, and you had to use it everyday, which one would it be?”

Now immediately, this forces you to think reasonably about this. Obviously, it can not be a Pagani, as you would struggle to do your shopping in it, or drive to the airport (think of all those high speed-bumps). No, the car must be reliable and boring enough, so that you can take it everyday to work with no hassle and start the first time on a cold winter day, yet be fun enough to make you smile each time you go for a drive.

That’s where the BMW M5 comes in, a car designed and worshipped for just that. What it is, is a sheep in wolf’s clothing, a sleeper car. Here is a car, based on your everyday boring executive saloon. This means you can use it to take the kids to school, drive to work, go and buy furniture at Ikea, yet on Sunday you can leisurely drive to Germany and go for a few laps of the Nurburing.

But, it would not be my choice. Yes, it is one of my favourite cars of all time – The M5 is probably the only car I genuinely want to own one example of each generation in my garage-, but I can find two major flaws with it. For one, on a personal level, I just find it a bit too big. The latest one is the size of a 7 series after all. The second flaw however is more a matter of taste: I do not like the engine. Sure it sounds great, and from what I read it is just as responsive as a normally aspirated engine, but just knowing that two turbos have been added to meet with emissions standards sort of ruins it for me. It is a bit like knowing that the girl you like is really beautiful, but only after spending three hours putting her make-up on; it’s all very fake. Just knowing that means the latest M5 would not be the car I would happily drive every day for the rest of my life.

No, I need something real, something uncensored, yet something usable, and thankfully, the Germans are still at hand: The Mercedes C63 AMG.

Yes I know, it could be because I lost my hooning-virginity in that car, but there is something about it that keeps me coming back. That big 6.2L V8 is as real and honest as a triple Whopper, with cheese and extra bacon. No downsizing and meeting regulations here, it’s all full fat.
And because it has a big boot, four doors and looks like the ordinary C200 Bluetec, you can use it every day, for the rest of your life.
So the question is answered then: The one car I would happily drive until the end, is the Mercedes C63 AMG….

When I was in India, there was one thing that I noticed. Yes, people there are having more and more money, and drive better cars. BMWs, Audis and Mercedes-Benzes are common there now. Yet of all the cars, I never once saw an M, RS or AMG. It is not really a question of cost or fuel consumption, the people there are as passionate as Americans or Europeans. There was one big factor preventing them from driving these machines everyday: the roads. 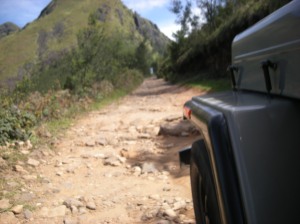 In India, saying the roads are bad is an understatement. Honestly, you could be cruising on the highway at 100mph, swerving amongst the trucks and all of a sudden hit a pot hole the size of a fridge.

That got me thinking, if I lived in India, driving a C63 AMG would not work, as I would be scared to take it outside, for fear of damaging that glorious V8 on a pothole. Luckily, Mercedes-Benz does have a car that can stand those roads, and with the same engine: The ML63 AMG. Now, I am not a fan of SUVs, but I have to admit, in India, it would make sense. And driving it everyday could still make me smile, just listen to it! (between you and me, it is also the car I drive the most on Forza for some reason). Yes the Porsche Cayenne is faster, but it just feels boring, and the Range Rover V8, honestly, I find it hard to have fun with it.

This made me think about that important question in a different way. Put it this way, if you were to take a car, to drive around the world, in say 2 months, what would you take? The C63 would be a good idea, until you reach the Middle East. And then when you get to Siberia, you are really screwed. The ML63 does look like the best choice.

Until I saw (or rather heard) something from the company I dislike the most: The Ford F150 Raptor.  Yes, it is a pick-up truck, and yes, Matt Farah owns one. However, that V8 produces such a glorious sound and it has a killer feature: That suspension setup! Here is a car made for the Dakar. It would just bounce over those potholes, sending you high in the air, and continue on as if everything was okay. It is a car made for every situation: it seats four, has enough room to fit a whole cupboard in the back, is comfortable and most important of all, it drives well on the road. This could be the ultimate compromise vehicle! Until you try to navigate it through Mumbai traffic that is….. Yes it is doable, but driving a truck every day sort of kills it. Damn, this is hard….

For now at least, I am not in India, nor am I trying to drive around the world (yet). So if you ask me that question, I will just say the C63 AMG.