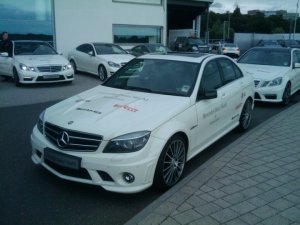 “Driving a race car is just like sex; all men think they’re good at it”. Not my words, but Jay Leno’s.

Interesting point of view I thought, but I’m sure taking a fast car around a racetrack should be pretty easy for me, as I have studied the stuff for the past 22 years, and I have the passion and dedication to do it right.
The first deception was when I drove that Gallardo LP560. Turns out braking BEFORE the corner, and following a good racing line is pretty hard. But then again, this was very serious stuff, I thought, with a bit of hooning around; I could easily manage it, and be a boss at stuff like drifting.

Drifting in theory is pretty easy after all: Take a powerful rear-wheel drive car, take it in a corner, hit the throttle hard, feel it slide, opposite lock, then control the slide with the throttle. Easy, non?
I always imagined so, and pictured my first drift to be some majestic swerve around a corner, at a 60 degree angle, one hand on the wheel, the other on the window ledge.

How wrong I was.

The setting: Mercedes Benz World in Brooklands UK
The car: a 2011 Mercedes C63 AMG (V8, 450bhp, the perfect car in other words)

It all started when I visited MB World at Brooklands, basically a massive dealership, with lots of historic and current cars on display. Oh, and a “technical race circuit” in the backyard. Visitors can, for a fee, take some of the latest AMG metal for a spin on the racetrack, with a mentor-type person, to see just how awesome these cars are. The whole concept is to showcase how technology advanced the cars are with all their cool sensors and stuff.

Anyway, I got to drive one of my dream cars (again), and this time I was not disappointed in the car. I was however, disappointed in myself in a way.
The car itself was great, and all I imagined it to be: Comfortable, sound like a dying dragon, and super slidy when asked for some fun. I mean, 450bhp in a saloon? It is goooooood!

Trust me, 450bhp is enough. Especially in a car that is relatively small, and can really be used everyday. Power is so underestimated these days! I mean, a couple of decades ago, the crème de la crème of supercars, the Ferrari F40, had 471bhp. Now you can get the same power in a small saloon car! (in a way, just like today’s smartphones have the power of computers from 10 years ago, but that’s another story). However, as they say, more is never enough….

So the experience then. After getting a feel for the car on the small circuit, I got to do a 0-60-0mph test. “Just put you foot down” the mentor said. And I did. Maybe it was the car, but I’m pretty sure the words that came out of my mouth were “Mein Gott”. The pure acceleration is pretty brutal, due to those ridiculous torque figures. And then the braking! Modern cars have come quite a way!
Once that was done, we did some spins on a wet portion, coupled with a demonstration of how the car controls the spin, keeping us alive. Impressive stuff I have to say. After that came the fun bits.

The big track, with tight corners, big straights and cones all over the place was in front of me. I had this stupidly over powerful car in my hands. So I went for it. I was having so much fun, and the mentor seemed impressed. But then he told me to try these racing lines and to try and brake before a corner. Suddenly it was not so much fun. It may seem pretty dumb, but braking before a corner is hard. You have to judge what speed you can take the corner before actually taking it. You have to make sure the corner is wide enough for the car in case it gets a bit sideways. You have to make sure you let go of the brake, and apply the correct dosage of throttle to make an ace corner. And you have to make sure you can actually turn in enough without over-doing it. All in all, it was hard, and not so much fun (okay, maybe exiting the corner, putting my foot down, and hearing that roar from the exhaust was amazing). I now understood why racing drivers always frown when they are driving. The concentration level required to drive really fast is immense! All in all, I was faster, but I was having less fun. Whilst doing this though I realised something, or rather did not realise it. When on the track, I had forgotten that I was in a big, comfortable and heavy saloon car. The steering was so precise, the agility and speed were so complete, and the braking… Again, hands down to Mercedes, this is a very good car. Making a muscle car feel comfortable on a tight twisty track is a great accomplishment!

Then, to finish off, came the drifting part. The track had an especially built oval, that had a continuous flow of water over it, to make sure it was always wet, and thus very slippery. I went on the oval, and followed my mentor’s word. Blip the throttle, feel the slide, opposite lock, and control with the throttle. Perfect.

I did all he said, and yet, 5 seconds later, there I was, facing the other way with a look of confusion on my face. “You put too much power” my mentor said. Fair enough, I thought, and tried again. 20 seconds later, I was in the same position. “Not enough power this time”. And again, “not enough steering” etc etc…
I did manage about 30 seconds of drifting, and it was pure joy, but somehow I could not continue it for longer.

Tried as I might, I did not manage to do a perfect drift, even though I had mentally rehearsed for 22 years. Something was wrong. Just when I thought I had cracked it, the session had to come to an end. Oh well, maybe next time.
Thinking about it, maybe it was not me. Maybe it was the car. Perhaps it was just simply too powerful to do a perfect drift. Perhaps it was not properly balanced. It is after all more of a muscle car than a racing car. But then I remembered the track bit.

Then again, that would be too easy to blame the car, so once I actually get a proper job, I feel a nice little BMW E30 325i and a new track would suit perfectly to my lifelong dream of becoming a drift master (or at least be marginally good enough at it).

For once that I have actually driven a car that I love, and still love it as much (if not more) afterwards, that can mean two things. Either I have matured, or Mercedes Benz AMG cars are just awesome. And I still love the Harold and Kumar series, so………